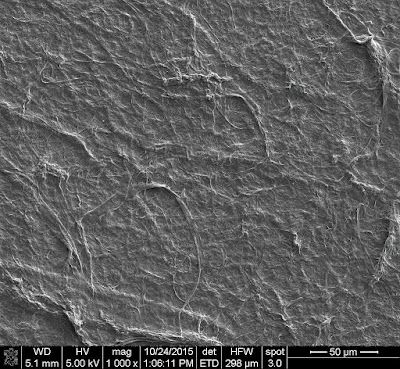 Successful SEM imaging requires not only competent microscope operation but also expert sample preparation. In the case of imaging nanostructures, sample preparation is generally the most difficult task. In this example cellulose nanofibers were imaged at low energy due to their low density. In the first image we see an undifferentiated mass as the undiluted but dried fibers were imaged after being dried on a stub and coated with 4 nm of iridium to suppress charging. 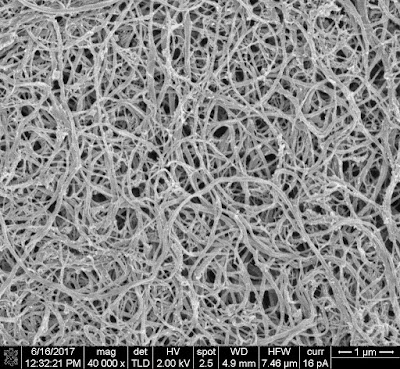 The individual fibers are largely unobserved. This is due to the surface charge of the fibers causing them to aggregate to not only each other but also the stub itself. At this point successful imaging comes down to successful sample preparation.

The first plan of attack in any dispersion problem is dilution. In the second image the fibers were imaged after significant dilution. Dilution helps disperse nano-structures by simply keeping them from each other so that they can not aggregate. Dilutions of 1:100 to 1:1000 or more can be necessary.

It was found that dilution alone did not solve the aggregation problem. Dilution provided small patches of agglomerated fibers that resembled the first image. This was because cellulose fibers are generally tangled together and can not be separated upon dilution-- only individual clumps can be separated.

The moral of the application note is to not give up when faced with useless images-- success is often a matter of a little experimentation with sample preparation.
Posted by Dr. Eric Lochner at 1:20 PM