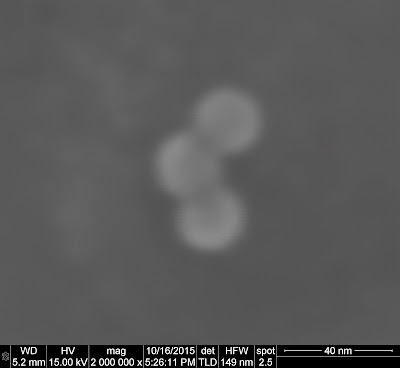 In this image gold nano-particles were imaged at 2MX using the through lens detector (TLD) in field immersion using secondary electrons. The sample was drop-cast directly onto an aluminum stub and then subsequently heated at over 100 C to drive off any physisorbed water and organic material. Sub 20 nm particles are clearly imaged and differentiated from each other. This is remarkable as TEM or AFM is generally required to image particles of this size.

Another concern is sample preparation and chamber vacuum. At very high magnifications the current density is exceedingly large. Organic material on the sample surface and in the SEM chamber will darken the image where the SEM beam interacts with the sample. At low magnifications this effect can be minimal. At the very worst leaving behind dark rectangles of reduced secondary electron contrast when the magnification is subsequently reduced. However at 2MX the image will just turn dark and featureless in seconds.

Another concern is stability. This includes acoustic noise in the SEM lab, mechanical stage drift, thermal drift of the sample as well as of the SEM column, and electromagnetic interference in the SEM lab. Mitigating the effects of electromagnetic interference may require active field compensation or shielding in the SEM lab. The effects from mechanical vibration and stage drift may require changing scan speeds and applying the stage clamp which helps lock the stage down. The objective lens is not a constant-current lens, and there is always some image drift until it comes to thermal equilibrium. Another significant instability is magnetic hysteresis in the objective lens. Remnant magnetic field in the lens can lead to drift. This is mitigated using the lens reset function.

The point of this application note is that 2MX magnification may seem very exciting-- but results are entirely a matter of sample preparation and operator skill!
Posted by Dr. Eric Lochner at 8:30 AM