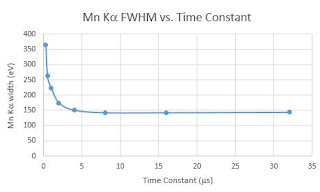 The fundamental principle of EDS is energy dispersion. By that it is meant that X-ray energies are measured by directly measuring their energy. In EDS detectors, X-rays generate an electrical cascade in a solid state detector where the resultant pulse height is proportional to the X-ray energy.

The pulse processing electronics of the EDS detector can be modified to change the performance of the detector. The most important parameter is the pulse shaping time constant, or as it is indicated in the software-- TC. The top graph shows the Mn Kα peak width as estimated by the FWHM as a function of the time constant, TC.  The smaller TC's result in wider peaks and thus lower spectral resolution.  As the TC is reduced the Mn Kα width reaches a floor of ~ 142 eV which represents the resolution of the EDS detector.  It should be noted that it is convention to measure the resolution of an EDS detector at the Mn Kα line: 5.893 keV. 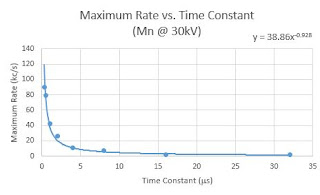 An obvious question is why would anyone then want to increase the TC and thus reduce the resolution of the EDS detector given the potential problem of overlaps?