Which Beam Energy Should I Use? 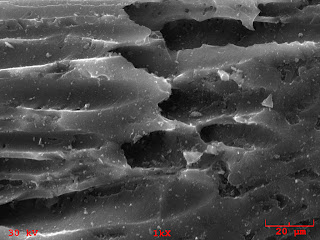 A common question is which primary beam energy is most desirable for imaging a particular sample. The question can only be answered by identifying imaging objectives and considering the physics of electron-beam sample interactions. While SEM column specifications are often optimal at higher energies, typically 30-35 kV, it is generally not primary beam diameter that determines image quality unless one is looking at nano-structures that are comparable in size to the probe size.

In this study activated charcoal was imaged at different beam energies at the same magnification, probe current and working distance. The same porous area of the charcoal surface was imaged, though some image rotation is noticeable due to the Lorentz force exerted on the rastered e-bean in the objective lens. Being graphitic, the sample was uncoated and was known to contain ash mineral contamination. To avoid operator "aesthetic bias" all images were ACB'd-- automatic contrast and brightness adjusted-- to highlight systematic changes with beam energy. 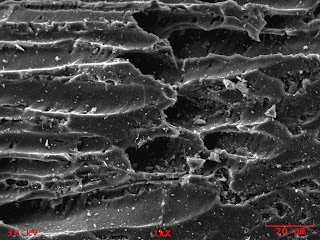 The top image was taken at 30keV.  It clearly shows the pore structures in the activated charcoal-- the horizontal ridges on the sample surface and the pores that go into the sample volume. The pores appear quite clearly, and there is some evidence of edge effects-- the edge brightness enhancement on the horizontal margins of some of the larger pores. All in all, the surface of the porous tubes looks fairly smooth, and there is some evidence of little particles on their surface. This isn't very shocking as graphitic materials have a low efficiency for generating secondary electrons. The sample looks "soft" and largely featureless, much like the carbon tape that holds it down.  It would look more so without the particulate material coating the pores.

Dropping the beam energy 10 kV is shown in the second image. It's clearly the same structure-- but it is slightly nuanced. The electron range is significantly less at 10 kV, even in a low density matrix like activated charcoal. This results in the enhancement of edge effects.  In the second image all of the pore edges are brighter due to edge enhancement. Edge enhancement occurs in secondary electron imaging--SEI-- because secondary electrons can be collected not only from the sample surface, but also the edge of the feature and perhaps even hidden surfaces of a feature. Much more surface topography of the pores is also visible at 10 kV. There are clearly ribs and ridges on the pore surface, and smaller secondary pores that emerge from the larger pores.

Most striking is the enhancement of the particulate surface trash. It is very prominent at 10 kV. It could simply be due to an increase in secondary electron emission efficiency at 10 kV. In general, we have to differentiate SE1, secondary electrons produced by the primary beam, and SE2, secondaries produced by back-scattered electrons. The lower electron range at 10 kV in the graphitic matrix increases the probability of generating SE2, and this perhaps is the cause of increased contrast of the surface trash. 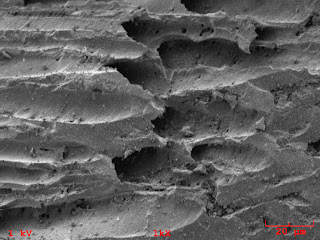 In the final image the beam energy is dropped to 1 kV. The efficiency for generating secondary electrons is very low at these low beam energies, and I like to characterize these low-energy images as "chalky". We aren't inventing or losing any morphological features as we change beam energies. The same features-- pores, pore ridges, small side pores, particulate matter-- are all visible, as the such image artifacts as edge enhancement, but the image quality is largely driven by detection efficiency. We get a very clear sense of the relief of the pores actually penetrating the sample.

So, which is correct? They all are. The SEM isn't lying. Which is best? It depends upon the story one wishes to tell with the SEM images. We finish the example with three images taken at much lower magnification, taken at 1 kV, 10 kV and 30 kV. Same general morphology-- different aesthetic quality and different features naturally enhanced. 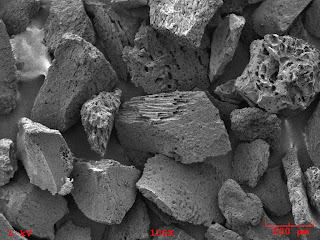 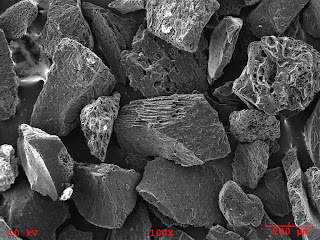 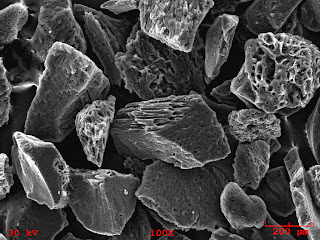