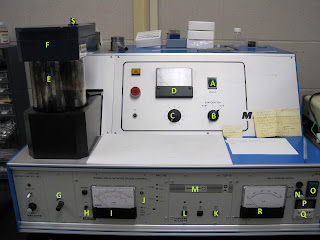 The picture shown is the SEM sample coater with the sputtering attachment.

"A" is the system main power. Turning this on will turn on power to the coater. Turning it off after a coating will vent the sample chamber "E".

"B" is the system mode. It needs to be set to HTS for sputtering and EVAPORATION for carbon flash coating.

"G" is the leak valve for leaking Ar into the chamber for sputtering. DO NOT OVER TIGHTEN! It only needs to be closed finger-tight. It must be closed before pumping the chamber down or the pump will not reach the desired base pressure.

"H" is the power to the gauging. There is a Pirani gauge for pressures down to the 10-3 mbar range and a cold cathode gauge for higher vacuum. If the light "J" is off then one is reading the black scale on meter "I" (Pirani gauge); if the light "J" is on then one is reading the red scale on meter "I" (cold cathode). Gauges are automatically switched.

"K" turns on the mechanical and turbo pump. One should lift up slightly on the deposition head, "F", to make sure a seal has been made and one is pumping. When the turbo pump is at high speed, all of the LED's at "M" will be lit. Button "L" sets the turbo to half-speed which is desirable when sputtering since one wants a partial pressure of argon in the system. When "L" is pushed several of the LED's at M will go dark and one will also be able to hear the turbo spinning down.

"O" turns on the high voltage timer which is set by the push-buttons "Q". The status of the timer is shown by the LCD "P". "N" must be set to SPUT for sputtering. Again, "R" shows the Ar+ plasma emission current.

Sputtering instructions will be outlined in a series of later blog entries.
Posted by Dr. Eric Lochner at 11:15 AM