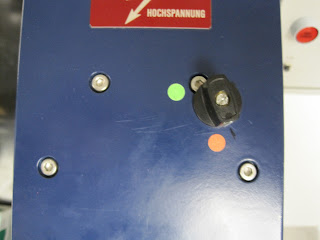 During this period the target shutter was closed to prevent any material from being deposited on the sample.  Now the shutter must be opened. The top of the sputter attachment is shown. The knob is on the red or CLOSED configuration. Turning it to the green is the OPEN configuration.

When the timer times out then the plasma current will natural go to 0 mA. Shut off the gas, gauging, turbo pump and mains power.  Turning off he mains power vents the sputter chamber so that the samples can be removed.