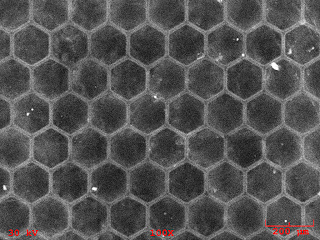 This is an SEI (secondary electron) image of the exterior surface of the EDS window. The Moxtek AP3.3 window consists of a silicon support with a hexagonal mesh to provide ~ 77% open area covered by ultra-thin layers of polymer, aluminum (to prevent charging) and a proprietary sealant called DuraSeal. The EDS window is on the order of nm in thickness. As such, if it is thicker than the IMFP of the low energy secondary electrons used to generate this image-- why is the grid visible?


There are two categories of secondary electrons. There are those that originate from the interaction of the primary beam with the sample. These are called SE1 and come from the vicinity of where the SEM beam interacts with the sample. It is also possible for elastically scattered electrons-- backscattered electrons-- to generate secondary electrons as they leave the surface. These are called SE2. Since the silicon mesh is of a higher density than the ultra-thin window, there are more SE2 electrons being generated near the mesh-- and thus the mesh is visible in SEI mode. We're really not seeing through the window! 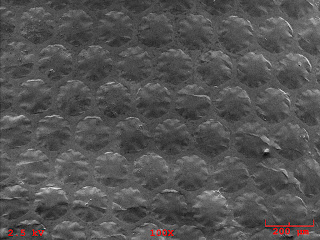 While the 30kV image was dominated by information from the grid due to the increased SE2 signal, at 2.5 kV the image is entirely driven by SE1 signal. In some SEM's the SE1 and SE2 signals can be discriminated against by changing the parameters of the ET detector, but that is not possible with the JEOL 5900. Dropping the beam energy to 2.5 kV has the same effect.

The morphology of the window dominates, and one can see little "pillows" of window in the regions of the mesh pores. This window failed by a blow-out when the vacuum of the detector was suddenly vented to air, blowing the window into the chamber (the present sample was found on the bottom of the SEM chamber). 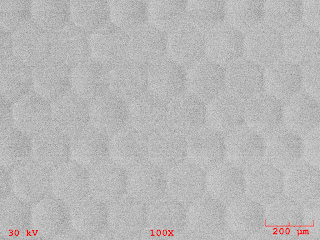 This image shows the BEI TOPO image-- topographic backscattered electron image-- taken from the exterior surface of the grid at 30 kV. The regions corresponding to the "pillows" seen above in SEI at 2.5 kV are evident by subtle contrast in the BEI TOPO image. Each pillow region is light on the left side and dark on the right side suggesting that the window is pushed out away from the silicon grid supporting it. This would be consistent with the window failing by blow-out into the SEM chamber.

The final image tests the morphology inferred by the SEI image at 2.5 kV and the BEI TOPO image 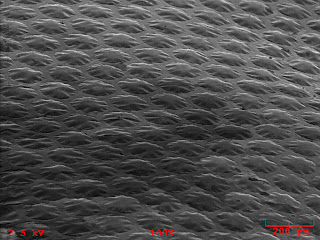 at 30 kV. It is an SEI image at 2.5 kV at very high tilt. The window can clearly be seen pushing outwards from the pores in the grid. The fact that the window is still intact in these regions is a testament to the high tensile strength of the window material. The EDS detector window is spec'd to withstand 10,000 cycles to atmosphere where the SEM chamber is vented with the detector interior at vacuum. This represents the extreme opposite case.

The point of this example is to illustrate the beam energy and choice of detector can have a profound effect on the morphology observed in SEM. If this system were imaged only at 30 kV, the morphological change of the window due to the blow-out would not be seen.
Posted by Dr. Eric Lochner at 8:51 AM