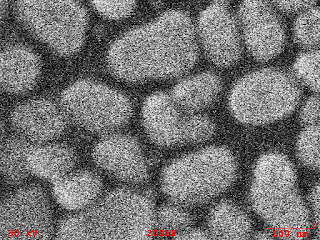 A secondary electron SEM image is a map of secondary electron intensity over the area that the SEM scan coils raster across the sample surface. While the resolution of the image is a function of the probe diameter which is determined by the spot size, it is also limited by the statistical noise in the image. If the probe current is very low due to a small spot size setting used to provide a small beam diameter, then relatively few secondaries will be generated to produce the image. As such, the image can appear to be grainy as in the first image presented in this example. This is statistical noise in the image. While one could increase the spot size to increase the probe current, this would be a poor solution to increase the image quality of this 200,000X image of Au clusters on HOPG. A larger spot size would increase the probe current and secondary electron yield as the expense of the probe diameter. The gaps between these clusters are on the order of ~ 10 nm and resolving them is easily lost at large spot sizes. The spot size setting in this image was 18 and the first objective aperture (smallest) was used. The imaging software was configured to average the SEI intensity over four points per pixel in this image. 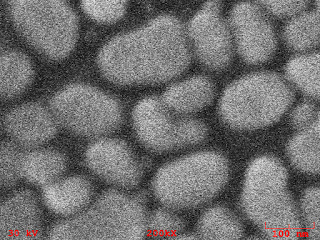 To increase the image quality while maintaining a low spot size and thus a small probe diameter, one can average over more points per pixel. In the second image, 4x more points (e.g. 16 points) were averaged per pixel, greatly reducing the graininess by reducing statistical noise. The gaps between the grains are more clearly resolved. In the center of the image one can now very clearly see that there is a little grain resting on top of a larger grain. One can now more confidently see some structure on the surface of individual grains, see some hint of brightening on the edges due to edge effects, as well as some very small grains between the larger grains. 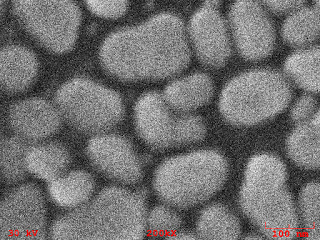 Another approach is frame averaging. In this final image four frames where each pixel is averaged over four points are averaged together. As such, each pixel is sampled as much as the image above-- 16x. However, there are subtle differences been simply increasing the pixel averaging and frame averaging. Increasing pixel sampling by 4x is very effective in removing very high spatial frequency noise-- e.g. noise that correlates with nearby pixels-- and statistical noise, but will not effectively average low spatial frequency noise, such as that due to mechanical vibration in the SEM lab. Due to the longer time to sample an entire frame, frame averaging is very good for removing low spatial frequency noise since each sample of a given pixel is separated by a longer period of time. At the same time frame averaging is subject to the effects of subtle drifts in the image due to charging on parts of the sample, hysteresis of the electromagnetic lenses, and thermal drift of the electron emitter. While this frame averaged image produces an even better image, a bit more care is required to reduce the possibility of image drifting: the filament was allowed to warm up completely, the column was completely aligned, and the lenses were cleared.

The object of this example is to show that simply increasing probe current will not produce higher quality images. Point and frame averaging are essential tools.
Posted by Dr. Eric Lochner at 8:32 AM