Imaging Composites by Made by Rotary Swaging 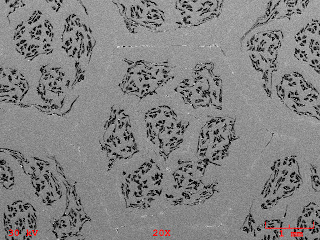 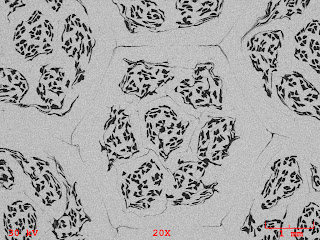 These images show the cross section of an Al-Cu composite formed by rotary swaging. The top image is a secondary image of the central hexagonal array of 7x7 arrays of aluminum wires in a copper matrix. The SEI image (top) shows the distortion in packing introduced by the rotary swaging. While the largest hexagonal packed units are coherent, the smallest hexagonal units are quite disordered and while the intermediate hexagonal units are not mixed, they lack hexagonal close-packed definition. Of interest are the boundaries in the Cu matrix between close-packed units. The SEI image shows some boundary between close-packed units, but it is unclear if this is a defect induced by polishing.

The BEI COMPO image (bottom) shows enhanced contrast between the lower density Al wires (dark) and the Cu matrix (bright). Since this is a probe of density and not topography, it is significant that the boundaries between close-packed units are very well defined. The cold-worked rotary swaging is not binding the copper interfaces between hexagonal close-packed units. Repeated slip along these boundaries in the swaging process is a potential source of the packing disorder seen. 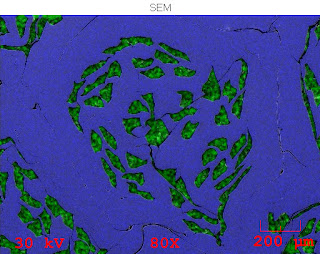