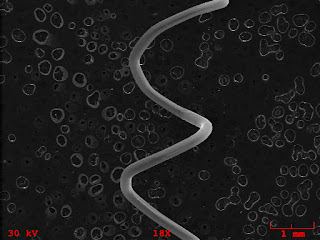 Shown is a series of SEM images of a cathode for a Kaufman ion source. The first image is in SEI mode where the image is based on secondary electrons. Secondary electrons are very low energy electrons generated by multiple in-elastic scattering events. As such, they emerge from just near the surface and thus provide a probe of surface morphology.

There are some subtle points to interpreting an SEI image. In cases of an exceptionally large depth of field, "brighter" generally means "higher" in topography since the secondary electron collection is enhanced when the source is closer to the secondary electron detector. At the same time, other effects are at play.

The background in this image is black, an example of one of the few chemical effects in SEI images: carbon-based materials tend to be very dark in SEI mode. This black background is the carbon tape used to hold down the sample. As a rule of thumb, if one encounters very dark areas in an SEI image, consider that they might be organic or carbon based material.

Note the bright "rings" on the carbon tape. These are edge effects around dimples in the tape adhesive. At the edges of features SEM images tend to be brighter because secondary electrons can be collected not only from the top but the edges of features. These edge effects are simply the effect of enhanced secondary electron collection, not generation. The interpretation of the bright edges of these dimples is not that the edges tip or curve upwards.

While there is some evidence of edge effects in the coil of the cathode itself, another effect is present. Note that the brightest portion of the image isn't the apex of the coil of the wire, but rather the surface of the right-most curve of the coiled wire. Why? This surface points towards the secondary-electron detector which it at the top of the image. Secondaries emerging from a surface pointing towards the ET-detector will be collected more efficiently, thus increasing the brighteness of these parts fo the image. 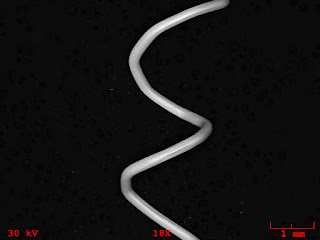 The second image is of the same coil of wire in BEI COMPO mode. This is the back-scattering mode that is sensitive to average atomic number, Z, or density. This mode is sensitive to density as it detects the net elastically scattered intensity scattered back towards the objective lens.

In this mode lighter areas are more dense, and darker areas less. This is generally true in our BEI COMPO image of the cathode. The tungsten wire is very bright while the carbon tape is featureless. Not even the dimples and pores in the tape are evident. 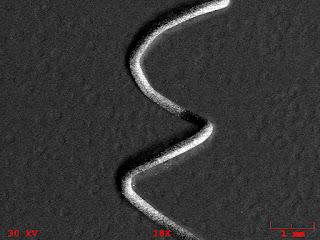 This change in the direction of back-scattered electrons can be used to probe surface topography in BEI TOPO mode where the intensity in different halves of the back-scattered detector is given positive and negative weights allowing for a differential and directional measure of back-scattered intensity. In the BEI TOPO image of the coiled cathode wire, the lighter areas indicate the BEI signal is larger on one side, while the darker areas indicate that the BEI signal is larger on the other side.

If we start at the top of the image, we see that the BEI TOPO signal is dark on the top edge of the wire and brighter on the bottom edge. What this is saying is that the surface normal points towards different halves of the BEI detector on different portions of the wire-- a reflection of topography. One can see portions of the coil where the BEI TOPO signal is entirely bright or dark showing that the surface normal points predominantly towards only one half of the BEI detector. With experience these nuances can be used to interpret topographic details that might be ambiguous in SEI images. 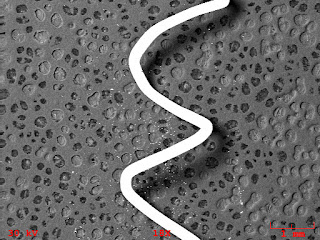 This last image is in BEI SHADOW mode which combines the detection of back-scattered intensity of the BEI COMPO mode with an additional BEI detector that is displaced from the end of the objective lens. The purpose of BEI SHADOW mode is to allow for shadowing effects allowing for further interpretation of the 3D morphology and topography of structures.

Note that the tungsten filament is brighter than the carbon tape, but also notice the dark shadows to the right of some portions of the filament. The SHADOW portion of the BEI detector is to the left of the image, so these dark shadows reflect the shadowing of BEI signal from the carbon tape by the filament. This shows that these portions of the filament loop above the plane of the sample stub-- another reflection of topography. Note that the contrast is unnaturally high in this image as BEI signal from carbon is generally quite low and the high contrast we required to see the shadows.
Posted by Dr. Eric Lochner at 6:56 AM