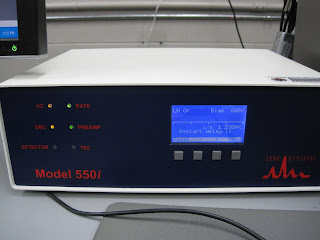 The EDS detector pulse processing unit is shown in this first picture. On the left hand side it has several LED's that blink and change color depending upon the status of the EDS detector. The most important are the RATE and PREAMP LED's which are typically green in color. If they are red then the EDS detector is being swamped with events. As such the dead-time is very high and the detector is not working efficiently. This status information will be reflected in the dead-time bar in the EDS software. 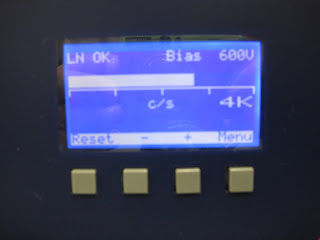 The second image shows the digital display for the EDS detector working normally. At the top right corner is the detector bias voltage which is always around 600 VDC as it is dependent upon the detector design. The top left corner shows the LN2 status. If the liquid nitrogen level were to drop, this would show some indication and eventually the EDS detector would be turned off. In the middle of the screen is a bar graph of the EDS detector signal. It shows a 4 kHz scale and a count rate of ~ 2.5 kHz. This photo was taken with a 30 kV beam on a brass sample stub, so X-rays were definitely being produced. 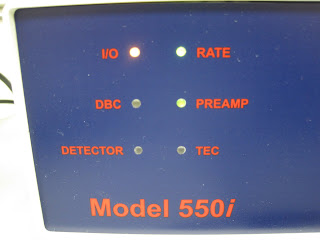 This third image shows the left hand side of the pulse processing unit during normal operation. The rate light is GREEN and BLINKING, as is the preamp LED. This is all normal functioning. 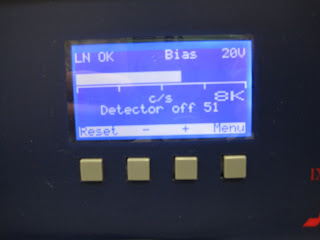 This next image shows the EDS pulse processing digital display after the chamber scope IR lamp has been on for several seconds. Note in the top right corner that the detector bias has dropped to 20 VDC from 600 VDC rending the EDS detector incapable of operation. Also note that beneath the rate bar it says "Detector off 51". This indicates that the detector is functionally OFF and the pulse processing unit is at "51" counting down from "60" at which time it will attempt to turn back on. If the rate is still too high it will turn the detector off and count down again. If one were to look at the dead-time status bar in the EDS software it would be red and at or near 100%. 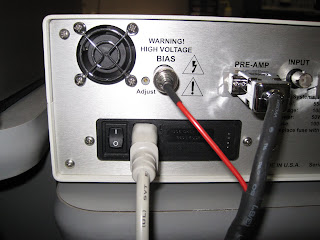 The moral of this post is that the EDS detector always works: it's just a question of whether it's detecting X-rays or IR-- and whether the bias is turned off from it being soaked in IR. Everything you need to know is on the front panel of the pulse processing unit.
Posted by Dr. Eric Lochner at 12:44 PM