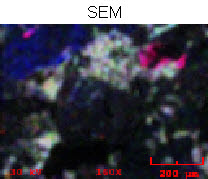 Color mixing in EDS elemental mapping can be exploited in different ways. Previously in spot EDS analysis, the presence of Mg, Al and Si had been noted in low density regions of the mineral syenite as determined by BEI COMPO imaging. The assumption had been that aluminum and silicon were present as tectosilicates common to syenite minerals as feldspars. However magnesium is not present in tectosilicates, but often in combination with aluminum and silicon as phyllosilicates. The Si to O ratio is a good indicator-- 2:5 for phyllosilicates and 1:2 for tectosilicates-- but without a significant O Kα signal due to a loss of light element sensitivity, such an analysis is not possible.

A novel approach is to use color mixing. The color palette was set to green for Mg Kα, red for Si Kα and blue for Al Kα. When green, red and blue mix in equal amounts the result is white. In the map shown above, the color is tending towards whitish suggesting the presence of the mineral family containing all three of Mg, Al and Si-- the phyllosilicates. The tectosilicates would tend towards purplish as they all contain Al and Si in combination. 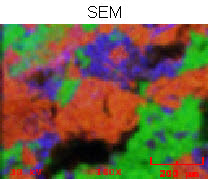 The second map is of the same region presented with a different color scheme: Fe Kα is red, Al Kα blue and Ca Kα green. The Fe map identifies the high density regions seen in BEI COMPO mode in a previous study as iron rich phases-- Fe or FeOx since these regions are also Ca and Al poor. Interestingly, the Ca and Al regions do not overlap. This shows a third distinct phase that was not detectable in BEI COMPO imaging. Calcium is not segregated to the phyllosilicate regions, but rather to distinct domains. Calcite is a good candidate for these Ca but Al, Si and Mg poor regions as C Kα and Oα would not be detected due to the loss of light element sensitivity. 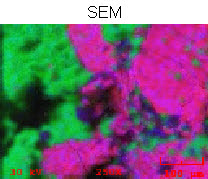 This final map addresses the question of where rare earths might be found in the syenite mineral sample. Previous spot EDS analysis had noted trace lanthanum Lα in the high density Fe-rich domains. In this map Ca Kα is green while Fe Kα is red and La Lα blue. Much of the high density Fe/FeOx grain is purplish due to the presence of La and the subsequent mixing of red and blue.

The point of this example is that elemental maps can exploit the mixing of colors to illustrate the mixing of multiple elements with the right color choices.
Posted by Dr. Eric Lochner at 11:22 AM