Be Foil: Imaging with Different Signals 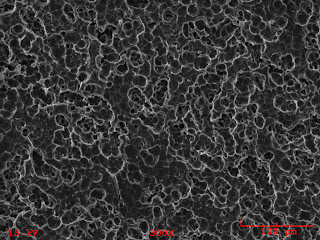 This is an secondary electron (SEI) image of a Be foil taken at 15 kV at 300X magnification. It shows a granular surface structure. The edges of these structures are brighter. This is an edge effect. In SEI images the edges of structures are very often brighter due to the enhanced secondary electron collection from the edges as well as top of the structure. It does not necessarily reflect higher topography. I say "not necessarily" as topographic contrast at the edge of structures can not be ruled out. While there are clearly some pores penetrating the surface, there are other structures that are something like spherical grains. It is not clear if these are positive features-- grains extendin 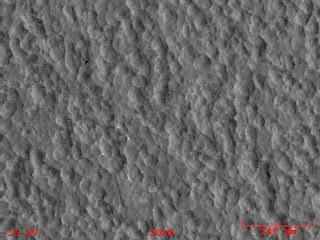 g above the surface-- or negative features-- indentations into the surface where a grain might have been removed from the surface.

The second image is of the same area with the same magnification (300X) and spot size taken with backscattered electrons in BEI TOPO mode. BEI TOPO is sensitive to surface topography. In this mode two quadrants of the BEI detector are weighted +1 while the other two quandrants are weighted -1. This yields something like the derivative of the surface topography as electrons will tend to backscatter preferentially into one half from positively sloped topography and into the other half from negatively sloped topography. In this BEI TOPO image there is considerable contrast, which each roundish feature having a brighter left half and a darker right half. This is consistent with negative features that push into the plane of the surface. This aids the interpretation of the SEI image above. 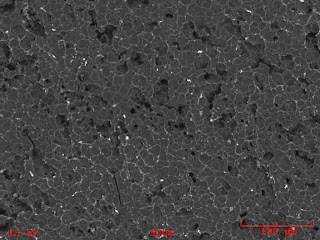 The last picture is of the same region with the same magnification and spot size in BEI COMPO mode. This mode is sensitive to average density or average atomic number. In BEI COMPO mode all quadrants of the backscattered detector are weighted equally at +1. A series of darker regions are present which correlate with pore features seen in SEI mode and identified with negative topographic features in BEI TOPO mode. EDS in this regions shows no EDS spectrum and EDS does not detect Be Kα X-rays at 109 eV. EDS of the bright areas shows random contamination from such materials as Al and Si. The BEI COMPO image reveals the extent of this porosity much better than the SEI image where pores are lost to surface morphology.

The object of this example is that SEM images taken in a variety of modes--- SEI, BEI COMPO, BEI TOPO, etc.-- are often necessary to effectively characterize the sample surface.
Posted by Dr. Eric Lochner at 12:31 PM