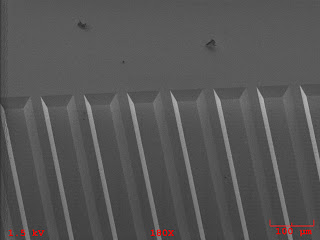 This is an SEI image of a grating etched into glass for testing scanning profilometers. It was imaged at 1.5 kV without coating. The normal way of interpreting SEM images is that the brighter features are from areas with larger secondary electron emission. The secondary electron emission coefficient is fairly independent of chemistry-- with the exception of carbon which is uniquely low-- and thus increased secondary emission can be assumed to be morphology dependent.

This can be difficult to determine. One of the benefits of backscattered imaging in topographic mode (BEI TOPO) is the ability to determine conclusively surface morphology. TOPO mode looks at the differential backscattering from the sample surface by adding two quadrants of the BEI detector together and subtracting the other two. BEI TOPO can't be performed at 1.5 kV as the backscattering yield is too low.

In this SEI image knowledge of the morphology is ambiguous and can be inferred only given knowledge of where the secondary electron detector is in the SEM chamber. Since the ET-detector is in the back of the chamber and slightly to the right it is inferred that these are trenches since the left wall of the trench is brighter and one would expect to get more efficient secondary electron collection from the trench wall facing the ET-detector. At the same time this geometric assumption is a bit suspect as the scan image rotates with the excitation of the objective lens, and there is also the possibility of the image being rotated with the scan rotation feature.
Posted by Dr. Eric Lochner at 12:36 PM