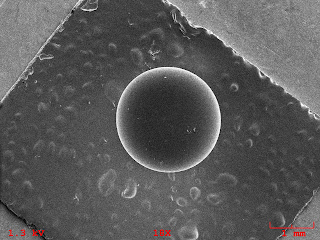 This is a sapphire sphere imaged in SEI mode at 1.3 kV. It is amounted on carbon tape on a standard Al stub. The bright ring around the sphere is an edge effect due to the enhanced secondary electron collection on the edges of structures. There is also a brightened margin around the edge of the carbon tape.

Imaging a sapphire sphere is very interesting as one can use it as an electrostatic lens to image the interior of the SEM chamber while it is under vacuum and in operation. This is useful in evaluating the status of the various detectors and is a good educational demonstration. 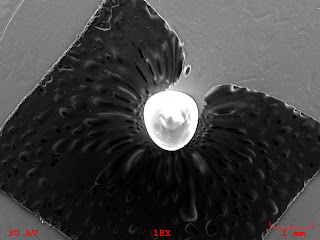 In the second image the sphere is imaged at 30 kV with very large probe current-- a large spot size. In other examples of charging the primary issues were time-dependent variations in contrast and brightness, together with the deflection and motion of very flexible structures like lint fibers, dust, and the like. In this image severe visual distortions are evident. The sphere is asymmetrical and smaller in size. The apparent relationships of structures is even different: it looks like the carbon tape is wrapped around the sphere. The bubbles on the carbon tape are distorted into arcs in the region near the sapphire sphere. In the next image the inside of the chamber is imaged by dropping the beam voltage to 10 kV. The sapphire sphere is sufficiently charged that the primary beam does not even hit the sphere. Rather, it is deflected by the positively charged sphere and hits the interior of the SEM chamber. Where it hits the interior of the chamber it generates secondary electrons just as it would on the sample. These secondary electrons are collected as usual by the ET-detector to produce an SEI image. This secondary electron image shows all of the components of the SEM chamber interior: the objective lens, various ports, and the different detectors used in imaging and spectroscopy. 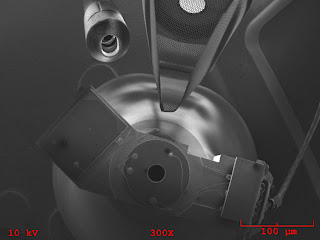 This next image is essentially what the sample sees in the SEM chamber. It is the same image as above with the magnification increased. The large round object is the objective lens (OL) which focuses the e-beam on the sample. The dark circle near the bottom of the image is the aperture of the OL-- this is where the electrons emerge. The structure diagonally across the OL is the backscattered detectors. On a disk at the end of the OL are the four detectors used for COMPO and TOPO BEI mode. At about 10 o'clock is an additional detector used in SHADOW BEI mode. Entering the image from the top is the secondary electron detector-- the ET-detector. The biased cage that collects secondaries is seen projecting towards the end of the OL. The bright disk near the top of the image is the surface of the scintillator that converts secondary electrons to light. To the left of the ET-detector is a narrow tube which terminates in the EDS detector. The object on the end of this tube is an magnetic electron trap to prevent electrons from hitting the EDS detector. 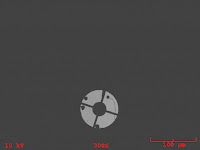 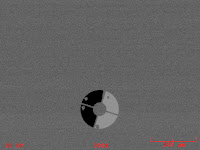