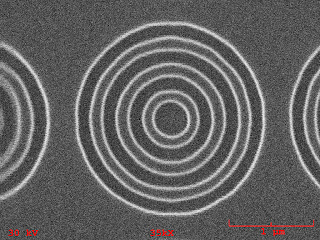 This is an image of three concentric rings lithographed inside a circular hole at 35,000X magnification. The bright edges are edge effects-- enhanced secondary collection near the edges of features. Above a few 10's kX fine focusing is generally not enough to produce a high resolution image. The condenser lens can focus the probe to a point-- but only if the intrinsic shape of the probe is point-like. Because of aberrations in the column, and because of the spatial extension of the tungsten emitter, the spot is often extended in shape. Such a distortion of the probe leads to a loss of resolution as the probe shape is essentially convoluted with the morphology of the surface. While this generally critical at higher magnifications (over 10-20 kX), it is good practice to deal with this issue even for lower mag images as it will add to the image crispness and definition.

This distortion of the probe shape is compensated by stigmators. The stigmators are a set of octapole lenses in the X- and Y-directions that act together to adjust the shape of the probe. They quite literally tweek the shape of the beam to condition it to its optimal shape. In practice one adjusts the fine focus, then one stigmator (X or Y), and then the other stigmator-- to return and adjust the fine focus. 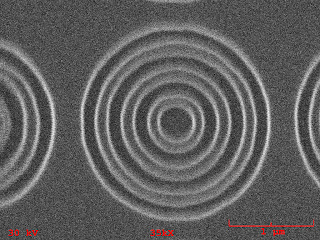 This image is of the same three rings except with the Y-stigmator slightly misadjusted. Notice that the rings are blurry at the top and bottom of the image, but not on the right and left sides. This is because the misadjustment of the stigmator has not elongated the SEM electron probe in the vertical plane of this image thus blurring the image vertically.
Posted by Dr. Eric Lochner at 1:17 PM

Email ThisBlogThis!Share to TwitterShare to FacebookShare to Pinterest
Labels: stigmators