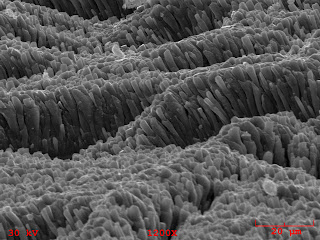 This is an image of the surface of a Ti filament from a Ti sublimation pump for ultra high vacuum. When viewed from above a fairly unremarkable granular structure was observed. What was of interest was the organization of grains into domains with raised edges-- little walls- between them.

A nice feature of SEM's is the ability to tilt samples at very high tilt angles. At large working distances the maximum tilt angle is nearly 90 degrees allowing one to examine surface morphology in profile. At a large tilt angle these raised domain walls were shown to consist of columnar grains of very high aspect ratio. As seen in the foreground of this image, if these structures were imaged solely from above, they would have appeared like roundish globular grains. It is thought that this remarkable structure occurs when the layer of molten Ti on the surface of the TSP filament forms fluid convection cells and then suddenly cools when the heating current is abruptly removed.
Posted by Dr. Eric Lochner at 7:14 AM