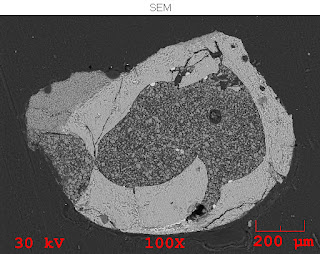 This image shows an SEM image of the cross-section of an Archaeopteryx femur bone. The bone was embedded in a polymer and then lapped smooth. The image is taken in compositional BEI mode where the total backscattered intensity is mapped. Since the backscattering coefficient is dependent upon atomic number, the BEI intensity is a measure of the average density of the sample.

The area surrounding the bone is dark because the embedding material is largely carbon based-- phenolic. The medullary cavity of bone is darker because it is of lower density than the bone itself. A fracture of the bone is present at the bottom of the image. In the vicinity of this fracture are regions of very high backscattered intensity-- much brighter than the bone-- indicating some material of very high density. There are similar high density inclusions on the margins of the medullary cavity as well. 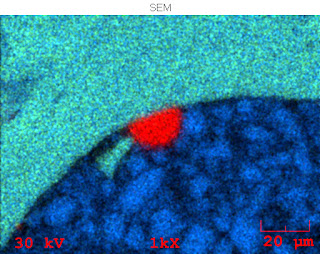 The compositional BEI image was used to locate a high density inclusion in the medullary cavity of the bone. This region was used for an elemental map using energy dispersive X-ray spectroscopy (EDS). In an elemental map an entire EDS spectrum is taken for each pixel in the SEM image. Spectroscopic regions of interest (ROI's) can be selected and mapped.

In this image the blue color indicates the intensity of Ca Ka X-rays, yellow P Ka X-rays, and red Fe Ka X-rays. This spectroscopic information is overlayed on the compositional BEI image.

The medullary cavity is calcium rich due to the presence of calcium carbonate-- thus the solid blue color of that part of the specimen. Bone is largely calcium hydroxyapatite which is a calcium phosphate mineral. As the blue from Ca Ka and yellow from P Ka mix on the image a green color is formed. The inclusion is red as it is iron rich. By performing additional maps on elements associated with clay minerals-- e.g. Si and Al-- it was determined that this iron rich inclusion was associated with a clay mineral that entered the medullary cavity through the bone fracture. (Thanks to Dr. Greg Erickson, FSU Department of Biology.)
Posted by Dr. Eric Lochner at 7:46 AM