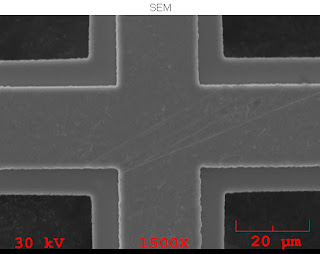 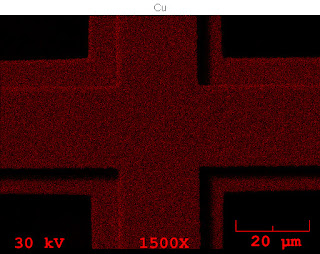 In this X-ray map of the Cu Ka line, it is immediately obvious that the TEM grid morphology is masking the Cu Ka X-rays generated by the primary electron beam. The EDS detector comes in near the top left quadrant of the image-- masking is absent in the top left quadrant of the TEM grid and present in each of the three other quadrants. Only X-rays generated in direct line of sight to the EDS detector are visible without attenuation. This is of concern in the interpretation of EDS X-ray maps, but also in the EDS point analysis on samples with non-flat morphology.
Posted by Dr. Eric Lochner at 12:56 PM